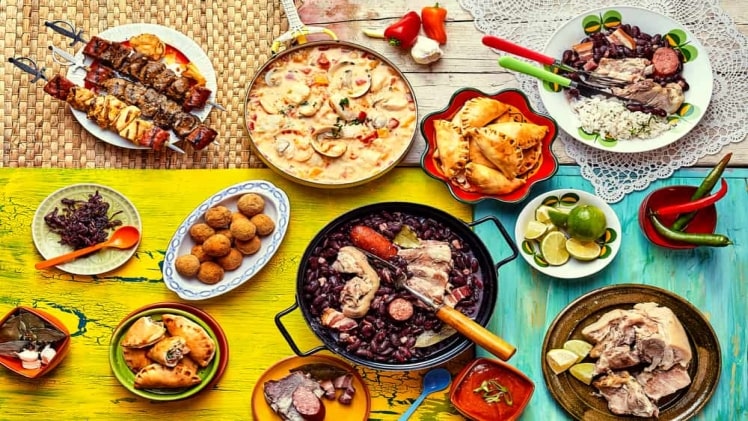 If you’re traveling to Brazil, or any country for that matter, trying some of the local food is a must. It’s one of the best ways to engage with the local people and culture. Brazil has large diversity when it comes to food and people. It’s also a large country with each region providing its own take on dishes and recipes.

A Brief History of Brazilian Food

Brazilian food comes from many different influences including the Portuguese colonization that began in the 16th century. Slaves brought from Africa and the indigenous peoples of Brazil also each influenced food in their own way.

Slavery was eventually abolished, but European and Asian immigrants were still brought to the country to work on the country’s many coffee plantations.

So, you can see how there are so many influences on the country’s culture and food. Meal time in Brazil is often more than just sitting down to eat. It’s a time to gather as a family or with friends to celebrate life and the day together.

You’ll see once you arrive in Brazil how important meal time is. While there are thousands of dishes to choose from, here are the ones that are an absolute must to try no matter how long you are in Brazil.

This is essentially a puff pastry filled with meat and cheese. Depending on the place you go, you might find them filled with beef, chicken, or just cheese. Some places even make them into a dessert and fill them with different jam flavors like guava.

This is a great addition to any meal or can be a light meal on its own if you aren’t too hungry.

This is one of the many traditional Portuguese meals you’ll see being served around the country that has since experienced an African influence. This is a great little snack or appetizer, especially if you like fish.

They are little balls filled with cod. The cod is first boiled and then deep fried before being put into a ball of dough. Sometimes you’ll see it served with rice and vegetables as a complete meal. Other people like to eat in the morning with coffee.

People will probably be trying to serve you Canjica if you are in Brazil for the cooler months or if you are visiting during the winter festivals in June. Canjica is a sweet porridge usually topped with coconut milk and sugar.

Some places also add cinnamon to the top. It’s a great treat to enjoy in the winter since it’s warm and sweet.

This is one of the most famous Brazilian dishes, so you will easily be able to find it in any restaurant. It’s also eaten in every region of the country making it a staple food across backgrounds and different people groups.

Some even refer to Feijoada as Brazil’s national dish. It’s a rich stew with pork, tomatoes, black beans, cabbage, and carrots. The pork is slow-cooked giving it a soft and melt-in-your-mouth quality.

This is exactly how it sounds, but Brazilians make it differently. You can get barbecued meat from small food vendors or restaurants. They are usually cooked over charcoal or wood depending on where you’re at.

If you go to a restaurant, they often slice the meat right onto your plate including lamb, wild boar, and pork. Some places also include chicken, sausages, and certain types of cheeses. They season all meat with a generous helping of coarse salt.

If you like chocolate truffles, you’ll love the Brazilian version called brigadeiros. They are one of the more simple dishes to make and can often be found at parties. They’re made by simmering cocoa powder and condensed milk.

Butter is quickly whisked in before the balls are shaped into small bowls. Some places even roll them in chocolate sprinkles. They’re definitely one of the sweetest things you will try in Brazil.

This is another favorite, especially among fish lovers. It’s said to have originated from the region of Bahia, but people in Espirito Santo also say they were the first ones to make the dish. Sometimes it’s just made with fish while other times you’ll find a medley of seafood.

The fish is often cooked with tomatoes, coriander, and onions to begin with before adding annatto seeds. The people from the Bahia region don’t use annatto seeds though. Instead, the stew is often creamier and heavier because of the coconut milk and palm oil.

Like all stews in Brazil, they usually serve it with rice. You might also get a type of spicy fish stew served with it depending on which region you’re in.

Trying the local beverages while in Brazil is just as important as the food. Cachaca is also often referred to as the national cocktail of Brazil. It’s made from fermented sugarcane juice. There are many different types and qualities available.

If you’re not worried about your vacation body, you can get some Acaraje from one of the many street markets in Brazil. It’s deep-fried and made with black-eyed peas and palm oil. Then they stuff it with dried shrimp, prawns, bread, and cashew nuts.

It’s quite a combination. Make sure to ask for the fresh ones that come straight from the oil as they taste much better when they’re not. If you like spice, you can also eat it with chili sauce. Acaraje is a perfect combination of Brazilian cooking combined with an African flare.

There are many different dishes to try while in Brazil including drinks and desserts. No matter your taste, you’re sure to find a dish in Brazil that you love. You might even ask for the recipe so you can learn to make it at home.

Importance of Sweets to Celebrate Special Occasions in Indian Culture

What Do You Know About Pasta Recipes

Benefits of Booking a Cooking Class for Your Team Building